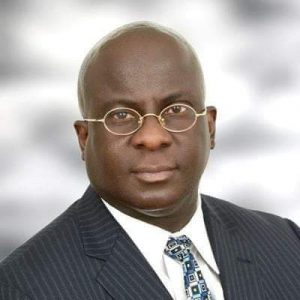 A Yorubaman is set to replace the Vice President of the United States, Kamala Harris.

Dr Akinyemi Agbede who left Nigeria for the United States several years ago is the favourite to win the vacant Senate seat left by Harris  after she emerged as the Vice President of the United States.

Agbede was born and grew up in Nigeria where he attended the Baptist Academy located in Obanikoro, Lagos.

He is said to be a Mathematics genius whose talents began to manifest at Babtist Academy in Lagos.

Agbede told his friends in the United States that BAPSACAD was one of the greatest institutions that moulded his career.

Agbede is one of the leaders of Democratic Party in the United States. He contested twice for the  Governor of California candidate in 2014 and 2018.

His ambition is said to have received the support of President Joe Bidden and his Vice President,  Kamala Harris at US Senate.The primary holds on June 7, 2022 while the general election is November 8, 2022.

He was said to have been one of the best students at Baptist Academy. He cake out with distinction from where he proceded to the University of Lagos where he read Mathematics.

He is also an alumni of He also  Redeemed Christian Bible College, Lagos Nigeria. He travelled to the United States after winning the Visa Lottery that have him permanent residency. If he wins the seat, he will be the Senator representing California in Washington and the first Nigerian to become a Senator in the United States.

Synagogue: Intimate Encounter With A Paradise In The Heart Of Lagos