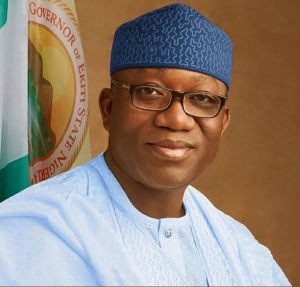 the ruling All Progressives Congress, APC, from the Southwest, Asiwaju Bola Ahmed Tinubu and Dr. John Kayode Fayemi had a closed-door meeting where undisclosed issues were discussed. 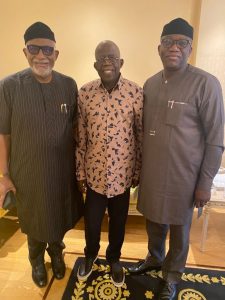 The meeting, which took place on Wednesday 12th January, however had no third party present and had nothing to do with the presidential ambition or otherwise of either of the two political leaders.
It was a family meeting of minds. It is therefore disingenuous of the spin doctors who were no where near the venue of the meeting to begin to second guess discussions at the meeting.

In a democratic setting like ours with so many issues begging for attention, discussion will go on daily among political leaders at various levels. Political leadership plays an indispensable role in foisting great responsibilities on people, thus both formal and informal discourses cannot be wished away.

Asiwaju Tinubu is a former two-term Governor of Lagos State and national leader of the APC, while Dr. Fayemi, also a chieftain of the party, is the governor of Ekiti State and current Chairman of Nigeria Governors’ Forum.

Meeting between the two leaders, dates as far back as their days in exile, when they were both involved in the struggle to wrest the country away from military jackboots, and has since been a regular occurrence both within and outside the country’s political space. So there should not be any big deal in seeing them meet, except someone has opted to create mischief out of it.

The story by the spin doctors stands logic on its head and stands not only disclaimed but condemned. It must have been sourced from the rumour mill, or at best, a beer parlour gist… it is mere conjecture.

If and when Dr Fayemi chooses to declare his interest in running for the 2023 presidential ticket, he would not be embarking on an ego trip that would warrant going into an unhealthy contest with Asiwaju Tinubu or anyone else. Fayemi sees Tinubu as his leader in politics and reserves respect for him as a national leader of his party. Neither will he run the race with the intention of using it to negotiate with anyone. Rather he will run because he is convinced it is desirable for him to do so.

Fayemi currently remains focused on finishing strong and well on the assignment at hand as two-term governor of Ekiti State. It should also be noted that there is still a sitting President equally focused on finishing well on his second term. Neither Fayemi nor Buhari would like to be distracted by such inanity at this juncture.

The masterminds of such fables are therefore advised to desist from doing so any further as it will not give them any political or social mileage. Rather it will wreak serious havoc on their personality, without reducing the worth of either Asiwaju Tinubu or Governor Fayemi who are respectable and respected leaders in their own rights.

Biyi Durojaye as an underground NADECO fighter: Tribute to a hero