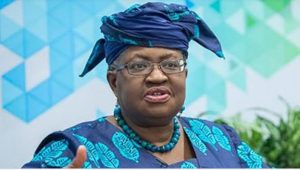 ⁰
By Segun Jones with Reuters

President Donald Trump is not interested in having Nigerian Okonjo Iweala as the Director General of the World Trade Organisation, (WTO).

On Wednesday, the United States told a meeting of the World Trade Organization that it does not back Nigeria’s Ngozi Okonjo-Iweala as the next WTO leader, despite cross-regional support for her, two sources at the meeting told Reuters.

The move could undermine the global trade body as it seeks to select a successor to director general Roberto Azevedo, who stepped down in August. A key group of WTO ambassadors had proposed Ngozi Okonjo-Iweala as the next chief, but any such decision requires a consensus among the 164 WTO members, meaning any of them could block her appointment.