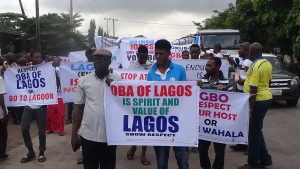 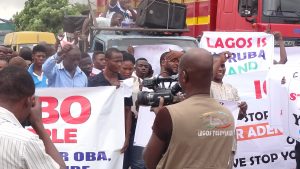 Yoruba youths took to the streets in Lagos today, warning that any campaign that Lagos is  “no man’s land’ will be met with a measure of mass resistance. Leading the protest this morning were thousands of Yoruba youths under the aegis of Oodua Nationalist Coalition, (ONAC) and the Pan-Yoruba National Alliance, (PAYNA).
“This is a symbolic rally to warn against the assault on Yoruba heritage. We are sick of people who trample on our heritage eventhough they make their millions on our territory”, a leader of the group, Mr Araoye Akinwunmi told the crowd that gathered at the entrance of Emzor, a major Igbo business outlet located on Aswani Road, Isolo area of Lagos. Hundreds of thousands of pamphlets were also distributed by the protesters warning that the Yoruba “will no longer accept the conscious attempt to turn us into slaves on our own land.”
For several hours, the protesters prevented workers and clients of the Emzor company from gaining entrance into the vast premises. The group said the action was taken, in part to protest the attempt to distort the history of Lagos and also as a mark of proportional response to the siege laid by Igbos on the business outfit of Dr Ariyo Adeniran, a renowned cardiologist who has seen a 60-day picketing launched by Igbos in Dallas, Texas in the United States. 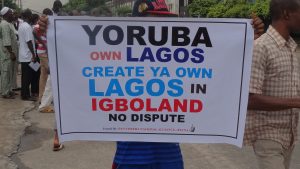 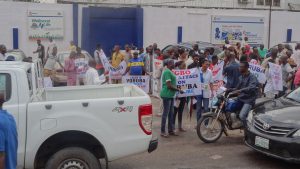 The protesters carried placards that read “Igbo: Respect our culture or go home”, “Don’t be jealous of Lagos, create your own Lagos in the East, No Dispute”, “Stop the attacks on Yoruba business or we stop your business in Lagos” “Attack on Dr Adeniran Ariyo is attack on Yoruba people.”
Araoye said “We are here as indigenous Yoruba people, speaking for over 50 million Yoruba people in Nigeria and abroad. On behalf of the Pan-Yoruba National Alliance, (PAYNA), we hereby express our disgust at the continuous insult being passed on the integrity and heritage of Yoruba people namely, that Lagos is a no man’s land. These past few months, we have listened to this statement being propagated mainly by natives of a section of the country living in Lagos.”
The group stated “We are going to stop their business in Lagos if the attack on Yoruba at home and abroad continues”, said Mrs Funmilayo Okunola who represented the Oodua Women Renaissance, (OWN) at the rally. Speaking at the event, Prince Martins Adeleke, leader of PAYNA said “this is a symbolic rally. More will come. Our actions will be determined by the proportional response to our demand that if you are living in Rome, you must respect the Pope. If you are living in Yorubaland, you must show respect to our agelong values and our cherished heritage.
He said “Our reaction will be slow, but steady. But one fact is that we are at a loss as to why those that do not share boundary with us suddenly realise that Lagos is no longer Yorubaland and must be claimed by them as an extension of their fatherland.” According to him, the assault on Yoruba heritage manifests “for instance, in the continuous siege placed on the office of Dr. Ariyo Adeniran, a renowned Cardiologist in Dallas, Texas, in the United States of America. Thousands of our Igbo people all over the world have been waging war against this innocent Yoruba person whose offence was that he supported the outcry of the Oba of Lagos, Oba Rilwan Akiolu that anyone who supports the retrogression of Lagos will be consumed by the goddess of the sea.” He alleged that Igbo owned companies have launched a ‘reciprocal discrimination campaign’ against Yoruba employees in companies located in Yoruba territory.
He said “This is uncharitable! It is anti-culture! As Yoruba people, we have been quite hospitable. We have a history that has reigned for thousands of years; we have a heritage that stood the test of time. We are used to seeing fellow human beings as allies in development. This has been our guiding principle.”
Adeleke said “as a people we, have a lot of respect for our traditional rulers. We have a lot of respect for our Obas. They occupy a special place in our history and in our spirit. We, therefore, feel deeply concerned about the current desecration of our traditional institutions by those who religiously and jealously guard their own. This assault may not necessarily represent the mindset of all of the people concerned, but we are at a loss at the silence of conspiracy of their leadership on the conscious attempt to undermine the heritage of the Yoruba people.”