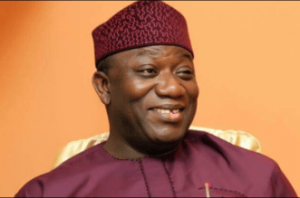 The Governor of Ekiti State, Dr Kayode Fayemi has debunked claims that his government plans to remove 16 high-class Bias in Ekiti State.

The Governor in a statement signed by Chief Press Secretary, Yinka Oyebode made available to Irohinoodua dismissed the plan to remove the Pelupelu Obas as a dust of lies-Iro Gbuu.

Fayemi3, he said hold the Obas in high esteem and would have no basis to remove any Oba. He argued that his government also enjoys the goodwill of the traditional rulers.

The government cautioned against reporters or bloggers creating make-beliefs in other to draw the public to their sites.

The reports, he said are products of ‘bloggers’ hastiness, grossly misrepresent the development.”
Oyebode said the Ekiti State Bureau of Chieftaincy Affairs is responsible for the coordination, management and welfare of the Traditional Council and its affairs.

He said Fayemi directed that the Bureau should write the affected traditional rulers to find out reasons for their absence.

“The Honourable Attorney General wrote to the Bureau on Mr Governor’s directives. Consequently, the Bureau (through a senior official) wrote to the affected traditional rulers seeking for reasons for their prolonged absence at council meetings. The formal nature of the letter is what is being misconstrued to be a query.”

Oyebode said contrary to insinuations, the letter is merely an administrative matter which is neither contentious nor confrontational.

“It is definitely not a ploy or plan to remove any Oba from office. As public officers, our traditional rulers act as the direct link between government and their domains; they have expected duties and functions, and as an administrative head, Mr Governor should be aware of reasons why such duties are not being carried out.”

According to him, It is on record that some of the Obas had earlier written Mr Governor to give legitimate reasons for their absence which have been accepted adding that the letter in focus was written to only about 11 Obas whose absence could not be explained and not to the 16 Pelupelu as erroneously reported.

He said in Ekiti State, “our traditional rulers are well respected and revered as custodians of our culture and traditions. The Fayemi Administration is committed to the welfare and protection of the cultural heritage of our people which the Kabiyesis hold in trust”

He said any rumour claiming that Governor Fayemi is planning to dethrone any Oba in Ekiti State is a deliberate and malicious misrepresentation of the true situation. It is obviously an attempt from opposition to create chaos and confusion between the Ekiti State Government and the good and law abiding people of Ekiti State