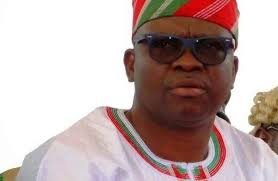 The All Progressives Congress (APC) in Ekiti State has condemned the arrest and detention of the President of Ekiti State Market Women Association, Mrs Waye Oso, by the police on the orders of Governor Fayose. It said such show of naked power is impunity taken too far.
It said the arrest of the woman, who is also the Iyaloja of Ado-Ekiti, is a continuation of clampdown on influential individuals‎ who refused to defect to the People’s Democratic Party (PDP).
Publicity Secretary, Taiwo Olatubosun, in a statement expressed indignation at the governor’s relentless humiliation of the market women leader over the years, noting that ‘the govenor has been in a running battle with the woman for being sympathetic to the outgoing APC government’.
Osho was arrested Monday evening in her Akute home on charges that she allocated land for market stalls at Awedele area of Ado Ekiti to some women after collecting N93 million.
But Olatubosun explained that this was farther from the truth as the land in question belonged to the Oodua Investment Company that operated outside the purview of Ekiti State government.
He added: ‘Former Governor Kayode Fayemi established a private/partnership scheme with the Odu’a Group of Companies that would empower vulnerable women and youths in the state.
‘Fayemi directed Ekiti Enterprise Development Agency (EEDA) with Seyi Ayeleso as the Director General to help Ekiti women get a place within Odua Complex. This land belongs to Odua Group. He wrote to Odua asking for their approval and it was granted.
‘Odua and the women signed an agreement for a 25-year lease to the market women at no cost to them but would only pay N3000 per shop to Odua on completion. All documents giving details of the above are still in EEDA office for verification.’
The APC spokesman expressed surprise at the manipulation of these facts to give impression that Mrs Osho had committed crime, saying the government had no business with the market at Awedele until Fayose started seeing market development as a primary function of his government.‎
‎
Olatubosun recalled that this was the second time in the last three months that the market women leader would be harassed by the governor who has vowed to make life difficult for her until she openly pledge loyalty to the ruling party.
‘ The first time she was embarrassed was when she and some market women met the wife of former Ekiti State Governor, Erelu Bisi Fayemi, at Fajuyi Hall close to the King’s Market.
‘Fayose was very angry that she ordered that her official vehicle, a bus, be withdrawn from her. Her latest arrest is a continuation of the clampdown on all perceived opposition members in Ekiti State who he has vowed to run out of town.
‘We call on President Muhammadu Buhari to protect Ekiti citizens and their property from the rampaging Fayose otherwise people may be left with no alternative than to resort to self help if the persecution of citizens perceived to belong to the opposition continues. This impunity must stop.
‘ The police must not lend themselves as tools of oppression in the hands of Fayose who, through dirty jobs has embarrassed many Police bosses out of the state in the last eight months.’

The first 1966 coup: Though painful, I’m happy I witnessed the killing of my parents-– Ademulegun-Agbi