Arimoro: Reflections on Ijesa Army General of the 18th Century 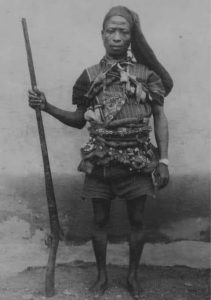 Arimoro: Reflections on Ijesa Army General of the 18th Century

Yoruba has a rich history of military campaigns, compared to the European standards of the same early century epoch. The life, battles, military skill and dexterity of General Arimoro is just one important reference point.

His full name is Farotimi Okunade who grew up in the Egbedi Quarters being a prince of the Owa of Obokunland. He was an infantry soldier trained at the Ibadan military School. At that time, Ibadan was a melting pot of various communities and had grown in the early part of 18th century to become the largest host of military institution in Yorubaland. Many Yoruba generals came from far and beyond for military training and exercises. Not much of research had been done on the Yoruba military school of the ancient times and where they were located especially the military school in Ibadan. But for certain, great warriors like Ogedengbe, Aduloju, Latoosa were all products of the Ibadan military academy.

Memories claim the trainers were carefully selected and that animal behavior were one of the elements used in the training exercises. The trainers would camp in the bush and study the behavior of animals when in danger: birds scurry upwards when danger is near but scurry horizontally when danger is far off; the squirrel made a special mew when sighting snakes or crocodiles; the buffalo runs violently when she noticed enemies from a distant but runs in circles when the enemies are in high speed.

Three years later, Ibadan launched a full scale war on Ijesha. Once again, Arimoro played a great role in the war and for the first time, Ibadan warriors noticed him as a potential problem. After series of combats with which Ibadan closed in dangerously on Ijesha, Arimoro escaped to Akure to avoid being caught and executed. A siege was laid by Ibadan on Ijesha to cut it off from the outside world and push to people of Ijesha to near starvation. This forced Ijesha to surrender and submit to the sovereignty of Ibadan.

While in Akure, Arimoro received constant sad news of how Ibadan totally subjugated his ancestral home into a tributary vassal of Ibadan and the imposed Ajeles. For few years after, he waited for another opportunity to defend his ancestral home from exile. During his campaigns at Akure, he met Fabunmi of Oke Mesi and identified with the rising momentum to rebel against Ibadan in the region. when events finally led to a full scale revolt against Ibadan Ajeles, Arimoro took part in the riots. After the massacre of the Ajeles at Ekiti, he went back home with his militia and took the front row place in a similar full scale revolt against ajeles in the region leading with example by killing the Ajeles at Ilesha. In a short while, all the Ajeles of the region would be massacred as was the case at Ekiti.

He joined the Ekiti Parapo army and fought alongside folk heroes like Ogedengbe and Fabunmi. After the end of the war, he came back to Ilesha in 1887 as a war hero. In 1896, he was offered the throne of Ilesha but he refused, as he had all political interests and chieftancy offers prior, claiming that his motivation for his ancestral home was nothing but love. He stepped down for his brother Haastrup to take the throne. Arimoro died in 1898 at a very old age after Haastrup, his brother had emerged as the King.

Arimoro urged him to take over the reign. The story of Haastrup is interesting. He was born in 1820. He was captured somehere around Oke Ibodi. He was taken into slavery. The Ship that conveyed them from Lagos port had a certain Captain Haastrup who developed interest in young and handsome Haastrup. Haastrup was later set free returning to Sierra Leone before coming back to Ilesa. He reigned between 1896 to September 1901. He was succeeded by Owa Atayero while his predecessor was Owa Alowolodu.