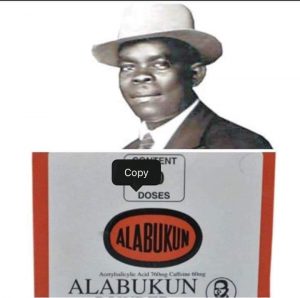 The story you are about to read is about a Nigerian who shook the whole world and the pharmaceutical industry in his days. However, his constituency-Nigeria forgets him. But let’s celebrate him today because if he had been alive today, he would probably offer solution to covid 19. Enjoy your reading and don’t forget to pass your comments.

Alabukun, one of the oldest drugs in Nigeria and even still very relevant and popular today. However, not many know the Jacob Odulate aka Blessed Jacob, a Nigerian pharmacist, inventor and entrepreneur, the brain behind the brand.

The Alabukun powder is like St. Louis sugar, a product deep in Nigeria’s pop culture. Without any advert or commercial, Alabukun remains insanely popular among generations in Nigeria. It has remained relevant through the years and it is very much a household name.

The medicinal powder which is cheap was discovered by a man called Jacob Sogboyega Odulate. He was born in 1884 in Ikorodu. When he was 14 years old, Odulate was determined to make a name for himself. He trekked from Lagos to Abeokuta in three months.

He then started his pharmaceutical business in the rocky city. In 1918 Jacob Sogboyega Odulate, the Blessed Jacob, sat at the work table in his laboratory, writing the notes which contained the formula for what would ultimately be known as his famous patented medicine, Alabukun Powder that is used to treat everything from a migraine to Myocardial Infarction.

The success of Odulate’s drug is down to the fact that it is a mix of European and traditional medicine. Throughout its 10 decades of existence, Alabukun has never been advertised but it is still very much in demand.

One reason why Alabukun was not advertised was because of its ingredients. It would have made it impossible for it to be in commercials. Pharmacists would have forced the drug out of business.

Another reason for Alabukun not having commercials was because it was wildly popular when it came out. There was a huge demand from consumers.

The enduring success of the Alabukun brand is now interwoven into the fabric of modern Nigeria medical history. The Alabukun Powder in particular is displayed and sold in thousands of pharmacies, markets and roadside stalls all over Nigeria. In many states in Nigeria, Alabukun powder is considered to be the obligatory cure-all for almost every ailment.

In neighbouring countries such as Benin Republic, Ghana and Cameroon, the eye-catching Alabukun brand is to be seen advertised everywhere. Alabukun products are sold in several towns and cities in the USA, the UK, in Europe, Brazil, Jamaica, even as far away as China. You can buy Alabukun products on-line, off-line, under-bridges and over-expressways.

Apart from making the drugs, the energetic Blessed Jacob also produced other brands like Alabukun mentholine, other preparations and an annual journal called Alabukun Almanac which was widely distributed in Abeokuta and eventually all over Nigeria between the 1920s and 1950s.

He sent his children to study at some of the best universities in Durham, Newcastle, United States of America and London. e.g Mrs. Folake Odulate (later to become Chief. Mrs. Folake Solanke) who is the first female lawyer in Nigeria to wear the silk and she also became the first female Senior Advocate of Nigeria (SAN). In 1966, she established the first law firm by a Nigerian female at Ibadan, Oyo State and named it Alabukun Chambers in honour of her great father.

Alabukun is 102 years old this year. No Nigerian product comes to mind that is a century old and still relevant.
Here is his photograph

Notes: This story was sourced from the web. The author-s name was not attached.